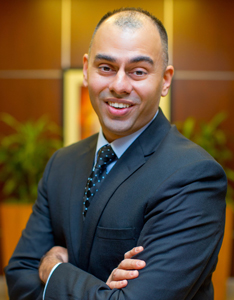 Dr. Sumeet Chhabra received his undergraduate degree from the University of Virginia and his medical degree from the George Washington University School of Medicine.  He completed his internship, medical residency, cardiology fellowship, and clinical cardiac electrophysiology fellowship at Thomas Jefferson University Hospital in Philadelphia, PA.  He was recruited to join HeartPlace in 2013 and serve alongside doctors in the largest independent cardiovascular group in DFW.

Although Dr. Chhabra is quadruple-boarded in internal medicine, echocardiography, cardiology and clinical cardiac electrophysiology, he exclusively focuses his practice on delivering minimally invasive and state-of-the-art electrophysiology services to the population of North Texas.

Dr. Chhabra has published articles in peer-reviewed medical journals, served as a co-author in a cardiac textbook, presented original research at multiple national meetings, and been invited as a guest lecturer to discuss advanced ablation techniques.  He is frequently asked to speak to medical and nursing staff at various hospitals, and has given several local print, radio, and online interviews for the community.

Dr. Chhabra especially enjoys meeting patients and their families to help them make informed decisions regarding complex medical situations.  As the field of electrophysiology continues to rapidly advance, the number of available therapies has continued to expand exponentially.  Dr. Chhabra firmly believes in “tailoring” the exact medical options for each particular patient and situation.