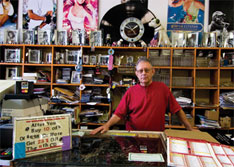 This quaint record shop on Jefferson Boulevard has been a part of Dallas since before Kennedy was shot. How do we know? Because the phone that Officer J.D. Tippit used just minutes before Lee Harvey Oswald gunned him down still sits on the counter. But the store is still mostly known for the music it has offered Oak Cliff for half a century. Ultra-friendly owner Mike Polk, who has run Top 10 Records for more than 30 years, keeps the inventory small and focused. As the bright neon signs in the window will tell you, you’ll find rock, hip-hop, oldies, Tejano, and more inside, as well as walls covered with posters and memorabilia from different eras. Though it might not carry the spectrum of music found in larger shops, the history and service are hard to beat.

Let this shop know you found them on D Magazine’s Online Directories.
Music

$
Request Edits to Your Listing
SMS