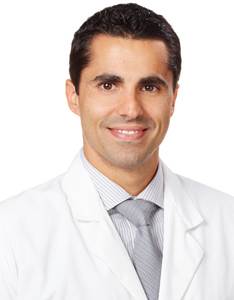 Dr. Leeds is a native of Long Island, NY. Early in his life he moved to Southern California with his parents and older sister. He grew up playing sports and attended Simi Valley High School. After high school, he attended California Lutheran University and studied biology. He continued his education and research at San Diego State University doing a Master’s degree in cell and molecular biology. While working on a Master’s degree, this affirmed his desire to become a physician and he left promptly to attend Ross University School of Medicine in Dominica, West Indies. During the medical school curriculum, Dr. Leeds excelled in anatomy and physiology pushing him toward surgery, and upon doing clinical rotations in New York and New Jersey, he was drawn closer to the field of surgery.

He completed his clinical rotations as a medical student in Phoenix, AZ at Maricopa Medical Center. He felt the learning environment, clinical experience, and surgical education was ideal to continue surgical education, and he remained there to train in the general surgery residency program. This program is affiliated with the University of Arizona School of Medicine, and the curriculum included rotations through several other prestigious affiliates such as the Mayo Clinic in Scottsdale, Scottsdale Healthcare Hospitals, and Providence Portland Medical Center in Oregon. Here he received several honors including awards from the emergency medicine residency program for the Impact Award, the House Officer of the Year from University of Arizona School Medicine, and the Ambassador of Medical Ethics given by the surgery department.

After completing general surgery residency, he went on to train in a minimally invasive surgery fellowship with one of the field’s greatest contributors, Lee Swanstrom, at Providence Portland Medical Center. While in fellowship, he operated with several world-renowned surgeons in the fields of minimally invasive surgery, colorectal surgery, and hepatobiliary surgery. During this time he became board certified in general surgery by the American College of Surgeons and accepted a job to begin a practice at Baylor University Medical Center at Dallas.