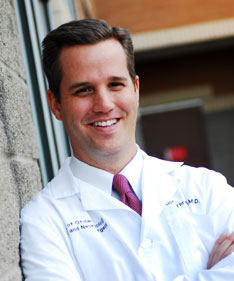 The ENT & Allergy Centers of Texas

Dr. Richard Thrasher is board certified by the American Board of Otolaryngology. He received his bachelor’s degree from the University of Utah and his medical degree from the University of Connecticut. He completed a general surgery internship in Denver before going on to an otolaryngology/head and neck surgery residency at the University of Colorado Health Sciences Center in Denver. While in residency, Dr. Thrasher trained at Denver Children’s Hospital (routinely rated in the top 5 children’s hospitals in the country) and has a particular interest in pediatric ENT.

Upon completing residency, Dr. Thrasher served on clinical faculty with the University of Nebraska Department of Otolaryngology/Head and Neck Surgery while he served as a Major in the United States Air Force for three years at Offutt Air Force Base in Nebraska. During this time, he won three awards for best instructor as a clinical preceptor for family medicine residents and physician assistant students. He also served as medical director of the surgical service and chief of otolaryngology at his base hospital. He was the first otolaryngologist in Nebraska, and the first in the Air Force, to perform the new balloon sinuplasty surgery. He was also the first otolaryngologist in Nebraska to perform an innovative procedure on the base of the tongue for sleep apnea and remains one of the most experienced surgeons in the country performing and training other surgeons on this technique.

Since moving to Dallas, he has already been featured in numerous local magazines including D Magazine. NBC News has aired a story on Dr. Thrasher’s contributions in the advancement of sleep apnea surgery. After having lived in the area for less than 18 months, he was selected to become the vice-chair and then chair of the department of surgery at the Medical Center of McKinney. He has authored several publications and remains active in pursuing clinical research in sinusitis and sleep apnea. Dr. Thrasher’s special interests include pediatric ENT, snoring/obstructive sleep apnea, thyroid surgery, and sinus surgery. Vist him at The ENT & Allergy Centers of Texas.

When not involved in clinical work, Dr. Thrasher enjoys playing golf, tromping through the Texas landscape taking photographs, or exploring North Texas with his wife and two children.

Our experts can treat the following conditions:

Let this doctor know you found them on D Magazine's Online Directories.