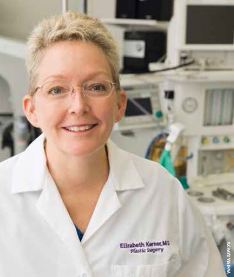 Elizabeth Kerner, M.D. was raised in the Dallas area. Following her cum laude graduation from Vanderbilt University, she attended Baylor College of Medicine in Houston. Dr. Kerner completed her general surgery residency at Vanderbilt University Affiliated Hospitals. Her plastic surgery residency was done at Wayne State University Medical Center in Detroit. She has been in private practice in the Dallas area since 1987. Enjoying both cosmetic and reconstructive surgery, Dr. Kerner focuses mainly on breast surgery, frequently performing breast augmentation, reduction, breast lift, and reconstruction after mastectomy. She enjoys facial rejuvenation and liposuction and recently added CoolSculpting® to her practice. Abdominoplasty is another common procedure in her practice and is often performed with gynecological procedures, such as hysterectomy.

In 1992, Dr. Kerner earned her board certification from the American Board of Plastic Surgery. She is a member of the Texas Medical Association and the Dallas County Medical Society. She is an active member of The American Society for Aesthetic Plastic Surgery. She served as president for the Texas Society of Plastic Surgeons and also served as president of the Medical Staff at Texas Health Presbyterian of Plano Hospital. Dr. Kerner was voted Best Plastic Surgeon in the 1998, 2002, 2003, and 2004 Scripps Community Newspaper’s Readers’ Choice for Collin County. She has also participated in medical/surgical missions to Honduras and Uganda.

Let this doctor know you found them on D Magazine’s Online Directories.
Plastic-Cosmetic Surgery
Request Edits to Your Listing
SMS