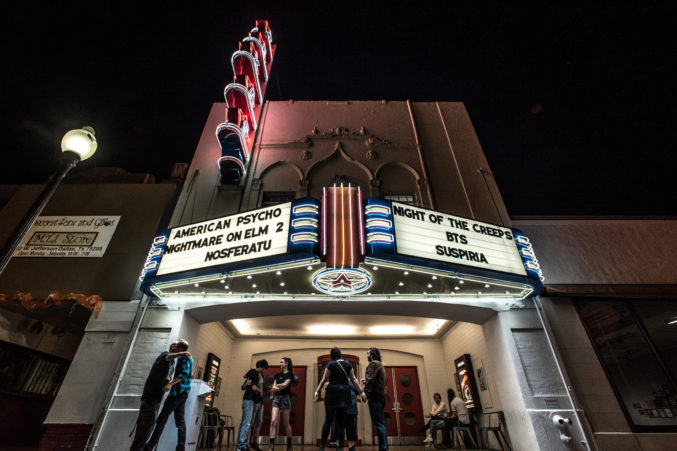 The Texas Theatre is a gorgeous building, laden with history–it’s where Lee Harvey Oswald was arrested–and brimming with new life. Also, it’s a hip watering hole. The bar is open mostly from Thursday through Sunday, essentially when movies are playing. You can order and take a drink with you into the movie theater. On a recent Friday, we stopped by the bar to meet friends and sit on a red-velveteen-ish-covered sofa. One film was playing in the theater. Another film was projected onto the wall nearby. No sound, just images. The floor tile, green and worn, was beautiful. The drinks were excellent— Moscow Mules especially that night, though the Woody Manhattan and the Scarface (with a splash of “coke”) were plenty good, too. Most people that night drank beer (four on tap), and most people seemed to be stopping by the bar for a drink on their way into the movie. During the film, the bar was quiet. A DJ was setting up, which happens regularly. By the time the main film had finished, the music had begun. It goes sometimes until 2 am. If you want to play records, you can do it downstairs, where a turntable awaits at the bar. (It’s BYOV-friendly. As in vinyl.)

Let this business know you found them on D Magazine’s Online Directories.
Pubs & Taverns
Request Edits to Your Listing
SMS