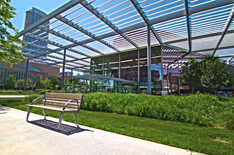 The Margot and Bill Winspear Opera House is part of downtown Dallas’ stunning AT&T Performing Arts Center, opened in 2009. Architecture buffs won’t want to miss it. The grand building was designed by Pritzker Prize winner Norman Foster and his company, Foster + Partners. It boasts a horseshoe design with modern updates, such as retractable screens, seating for 2,200, and a retractable chandelier. You can’t miss its shiny red façade, which reflects the Dallas skyline.

The Winspear has two performance halls: Margaret McDermott Performance Hall and the smaller Nancy Hamon Education and Recital Hall, which holds events, meetings, or classes for up to 200. The Winspear is the home of the Dallas Opera and Texas Ballet Theater, although Broadway shows and other performances grace the stage regularly.

Read More About The Margot and Bill Winspear Opera House