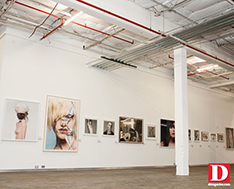 Patricia Meadows co-founded a nonprofit art space called D’Art in the late ’70s, offering local contemporary artists “a piece of the wall.” More than three decades later, the gallery, now known as the Dallas Contemporary, has more than 900 members and donors and attracts some 28,000 visitors each year. Under the guide of Joan Davidow, who served as executive director from 2001 to 2010, the Contemporary focused on showcasing emerging Texas artists but has expanded its influence to national and international artists as well.

After more than 30 years in a few different homes on Swiss Avenue, the Contemporary moved into a refurbished metal-fabrication building between the Design District and the Trinity bridge site in late 2009. The new home on Glass Street has 20-foot ceilings and enough space to accommodate multiple exhibitions, as well as large art and sculptures. The museum is non-collecting, and always free.
Peter Doroshenko has been director since 2010.

Let this business know you found them on D Magazine’s Online Directories.
Galleries
Request Edits to Your Listing
SMS