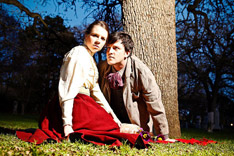 Kitchen Dog Theater Company was founded in 1990 with a very clear focus. A group of five SMU alums, each with a master’s of fine arts, wanted to create a place where moral and social norms were examined and challenged through theater. Rather than taking a subjective stance or providing a definitive answer to these issues, Kitchen Dog Theater simply hopes to pose a question that is to be answered individually by each member of the audience.

The company’s name is derived from Samuel Beckett’s Waiting for Godot, a play in which the kitchen dog represents a societal cycle of ignorance and wrongs. KDT performs around five programs a season, and plays are chosen based on content rather than era or familiarity, so playwrights such as Anton Chekhov are often countered with lesser-known names. KDT also offers workshops and classes to students in Dallas. PUP Fest might sound cute and cuddly, but it’s actually a project KDT does in conjunction with the Junior Players, producing five works by some of the area’s most promising high school playwrights.

In 2015, the company moved to a new location in the Design District.