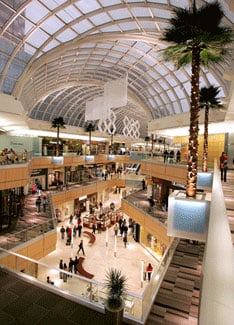 Since 1982, the Galleria has been one of Dallas’ largest retail centers and a popular stop in a city known for shopping. Spanning four floors—including an ice skating rink that occupies the ground level—there are more than 200 stores and restaurants in this massive mall. The Galleria fits with the grandeur of the Dallas retail scene by offering the city’s only locations for upscale stores such Gucci, Baccarat, Zara, Tourneau, Karen Millen, and Thomas Pink. Besides a name, it shares a few common features with Houston’s slightly older Galleria, including a connected Westin Hotel and an enormous glass-vaulted ceiling, which both malls modeled after the Galleria Vittorio Emanuele II in Milan, Italy.

The skating rink is open seven days a week, and for just $11 (or $8 if you’ve got your own ice skates), it’s a great place to cool down, especially on those sweltering summer afternoons. There’s also a jungle-themed playground on the third floor for kids and more than 30 places to grab a meal, snack, cup of coffee. Weekends can get a bit hectic, but with more than 10,000 parking spaces (most of which are covered), as well as 24-hour valet and taxi and limo service through the Westin, there’s room for everyone.

Let this business know you found them on D Magazine’s Online Directories.
Shopping Centers
Request Edits to Your Listing
SMS