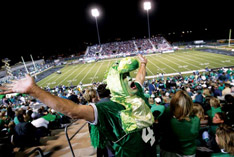 Just about everyone who went to high school around these parts has fond (or not so fond) memories of his or her football team getting trounced by the Southlake Carroll Dragons at Dragon Stadium in Southlake, Texas. This artifical turf field, which seats more than 11,000, opened in 2001 to the tune of about $18 million, and hosts both football and soccer games for its Carroll ISD teams. When FC Dallas was known as the Dallas Burn, MLS games were played here. In 2009, a $5 million bond renovation enclosed the east and west endzones.

In Southlake, everyone is a Dragon, basking in the glow of countless Division I championships plus state titles in cross country, swimming and diving, baseball, soccer, theater, accounting, and robotics. At the elementary and junior high levels, every school’s mascot is a Dragon. Starting in the seventh grade, every Southlake Carroll football team runs a version of the same complicated pro-style spread offense. It teaches the kids the Dragon Way, gives them something to know for certain when the crush of media and roar of 11,500 fans greet them a few autumns later.

Let this business know you found them on D Magazine’s Online Directories.
Request Edits to Your Listing
SMS