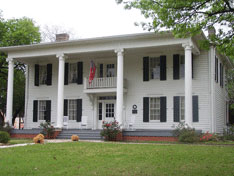 When James J. Eakins couldn’t round up the cash to pay his taxes in 1876, he gave the government a 10-acre plot of land that soon thereafter became City Park, the first park in Dallas’ history. Almost a century later, the newly formed Dallas County Heritage Society helped relocate the historic Millermore house to City Park in 1967, establishing the area as a hotbed of Dallas history.

Today, Dallas Heritage Village has dozens of historical structures over 13 acres of land and more than 25,000 historical items in its collection. Two “Living History Seasons,” lasting from March to June and October to December, offer a chance to step back in time, with special exhibits and actors who dress in period clothing and speak in 19th-century vernacular. In February and July, the 38 historical structures at the village are opened for tours, and while there are no characters to interact with, guests can explore authentic buildings such as the Citizen’s Bank, Main Street Saloon, and Blum Brothers General Store.

A group of 10 or more is required for a docent-led tour, but smaller groups shouldn’t worry; there are plenty of helpful plaques and pamphlets available on the grounds. The village is a tremendously educational experience—great for curious kids or history buffs—and a picnic area with tables make it the perfect place to bring the whole family.