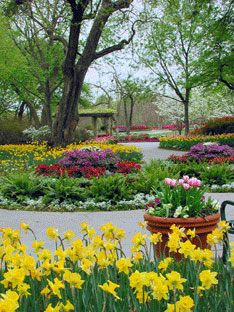 Renowned geophysicist Everette DeGolyer spent a part of the 1930s trying to establish a botanical preserve in Dallas. Half a century later (and almost 30 years after DeGolyer’s death), the Dallas Arboretum opened to the public on the grounds of the enormous property he once owned. Since 1984, this horticulturist’s haven has awed visitors with its immense gardens that display tens of thousands of breathtaking flowers year round.

The arboretum took most of its land from DeGolyer and his green-thumbed wife Nell’s 44-acre estate on the shores of White Rock Lake, though it stretches for an additional 22 acres. As you enter near the visitor’s pavilion, take a walk on the winding Paseo des Flores, the garden’s main pathway that leads you past the DeGolyer home on your way to Fogelson Fountain. For lunch, find the DeGolyer Garden Cafe for soups, salads, and sandwiches on the scenic loggia, or, if you’re in a hurry to see everything, order something from the Terrace Restaurant window and take it to go. The Martin Rutchik Concert Stage holds seasonal concert series and other performances. With lawn seating and a view of the lake, it’s the perfect spot to bring a picnic and enjoy a relaxing evening outdoors.

There are four major festivals each year that bring seasonal flowers and family-friendly events to the arboretum. Dallas Blooms runs for six weeks in March and April, featuring more than 500,000 spring bulbs and 100,000 pansies, violas, and poppies. May Flowers is a month-long event with some 80,000 spring blooming annuals. Autumn at the Arboretum is a eight-week festival with a mix of summer and fall flowers alongside an enormous pumpkin village with over 90,000 pumpkins and gourds, while Holiday at the Arboretum starts the day after Thanksgiving and features attractions such as nativity scenes and nutcracker collections.

Regardless of the season, the arboretum always has enough in bloom to fill an afternoon (or several), but a word of advice to those with pollen allergies: bring the Benadryl.