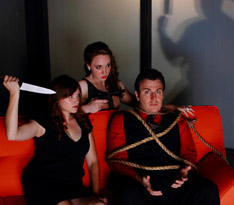 Theatre Three’s had a handful of homes since it started in 1961, staging plays in a Sheraton Hotel and a renovated Deep Ellum garage during its first eight seasons. The company moved into the Quadrangle in 1969, and Theatre Three has remained in this Uptown venue for more than four decades. Seats are divided into four sections—north, south, east, and west—and surround the stage for a unique viewing experience. There’s also a second stage, known as Theatre Too, which has its own schedule and room to seat 80.