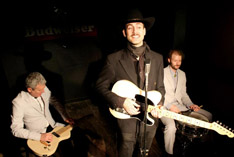 Plenty of playwrights, actors, and artistic directors have said they live for theater. But few can say they’ve lived in one. Yet that’s the story of Matthew Posey, owner and inhabitant of the Ochre House, a small (45 seats) alternative theater on Exposition Avenue near Fair Park. Posey, who writes, directs, and acts in most of the shows produced by his Balanced Almond production company, creates worlds full of bizarre, yet strangely loveable characters. Over the years, he’s cultivated a reputation for everything from the delightfully weird to the downright twisted, mixing provocative material with dance sequences, live original music (written, usually, by Ochre House regular Justin Locklear), and the occasional cross-dresser. His puppets behave badly (in 2009’s Coppertone series, and, to some extent, in 2011’s Morphing), as do his humans (Morphing is based on Eugene O’Neill’s dysfunctional family drama, Long Day’s Journey Into Night.) His latest production, Mean, was a fictionalized musical account of the first meeting between mass-murdering cult leader Charles Manson and his now-famous cohorts, Squeaky Fromme and Tex Watson.