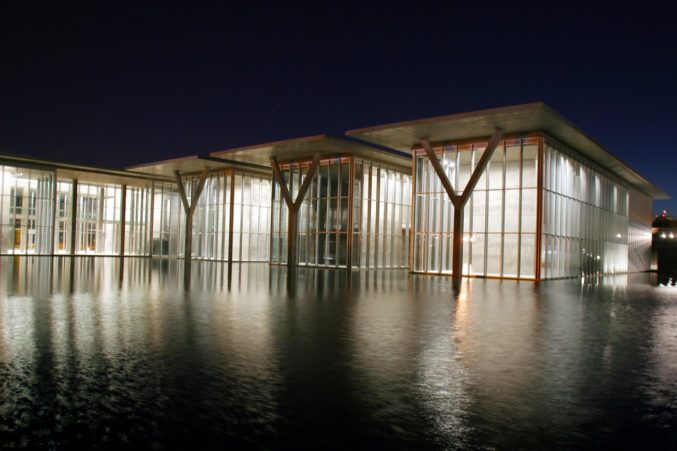 Modern Art Museum of Fort Worth

The Modern’s been around a while it was chartered in 1892, in fact making it the oldest museum in the state. Despite having more than 53,000 square feet of gallery space, its permanent collection of some 3,000 works is on rotation because the museum simply can’t show it all at once. Special exhibits also change out regularly and often focus on the works of one artist, such as Susan Rothenberg’s Moving in Place in 2009 or more recently, Ed Ruscha’s Road Tested. Regardless of what’s on display from the colorful pop art of Roy Lichtenstein to the abstract dots and dashes of Adolph Gottlieb this collection of post-World War II artwork has something for everyone to enjoy.

Since 2002, the Modern has been housed in a building designed by Pritzker Prize winner Tadao Ando. The facility comprises five flat-roofed glass structures that sit on a peaceful 1.5-acre pond. Located next door to the Kimbell and Amon Carter museums (designed by Pritzker laureates Louis Kahn and Philip Johnson, respectively), the Modern is part of an important row of architectural achievement in Fort Worth.

The Modern’s restaurant, Cafí© Modern, overlooks the pond and offers a reasonably priced lunch menu with inventive dishes. The Modern holds several events throughout the year, ranging from a Tuesday night lecture series to Magnolia at the Modern, an ongoing series that shows acclaimed films every weekend. Hour-long tours are available for groups of 10 or more, but smaller assemblages can tag along on a 2 pm tour every day (except Monday, when the museum is closed) for just the price of admission.

Read More About Modern Art Museum of Fort Worth