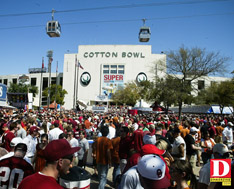 Though the Cotton Bowl was built in 1930, a recent $57 million renovation has transformed it into a storied stadium with modern amenities. The stadium at Fair Park still hosts a number of football games every season, including the annual Red River Shootout between the University of Texas and the University of Oklahoma—a sell-out every year—and the new Dallas Football Classic bowl game, which started in 2011. The Cotton Bowl also serves as a concert venue and has hosted such high-profile entertainers as Elvis Presley, U2, Eric Clapton, Van Halen, and The Rolling Stones.