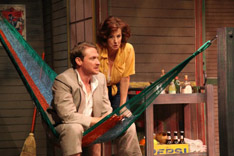 The red brick building on Sears Street was once a church, holding Sunday services for the population of Lower Greenville. Now, the edifice serves as the home stage for the Contemporary Theatre of Dallas, which produces works from playwrights ranging from Neil Simon to David Sedaris. The Contemporary Theatre of Dallas stages plays depicting the complexity of human relationships (often with a comedic bent). CTD executes an ambitious performance schedule, often running programs for a month before taking a month off to prepare the next production. Seasons don’t really have a definitive beginning or end. Officially, the CTD season starts in October and wraps up in September, but the company doesn’t take a long off-season break. Plays chosen for production are usually of the highest caliber, from the works of legendary playwrights (Neil Simon’s Brighton Beach Memoirs and a more recent, stunning production of Tennessee Williams’ Night of the Iguana) to Pulitzer Prize-winning authors (Wendy Wasserstein’s The Sisters Rosensweig) to cult favorites (David Sedaris’ The Santaland Diaries).